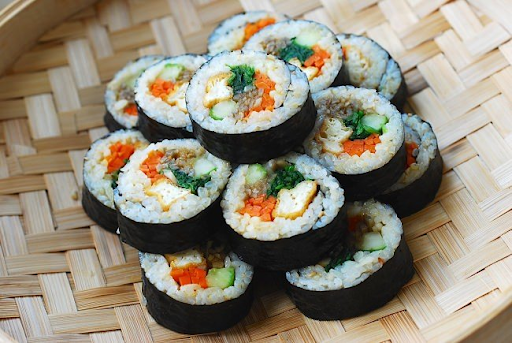 Growing up, making instant Shin ramyun was the extent of my Korean cooking skills. My mother taught me how to eyeball the perfect soup powder-to-water ratio, when to listen for the beugeul beugeul simmering sound to drop in the dried noodle cake, and how to get the noodles jjolgit jjolgit (nice and chewy). Mama Park was too busy working odd jobs and supporting her siblings and then her children to ever learn my grandmother’s elaborate recipes, let alone teach them to me.

For most of my young life, she worked long hours with my father all day in Flushing, Queens, commuted in rush hour traffic back to Long Island, and still somehow managed to put simple meals on the table. She often relied on buying banchan (side dishes) from H-Mart or bringing home take-out. All I needed to do was make rice, which she taught me to measure with my knuckles.

Like many ethnic cultures, Koreans tend to forgo measuring cups and written recipes, simply knowing what to add and how much to add by taste alone. But as we assimilate more and more into American culture through each generation, how do we hold onto our cuisines and their individual histories? How do we pass them down?

It was while I was studying abroad in Lyon, and there wasn’t an authentic hansik restaurant in sight, that I began to despair at my lack of culinary education. I bought a tiny jar of kimchi for 6 euros and made a long-distance call to my mother for a kimchi pancake recipe. She paused. And then she told me to mix in enough flour and water “until it drops ddook… ddook from the spoon, not ddook ddook ddook.” Did I somewhat understand what she meant? Yes. Did I know how to execute that? Absolutely not. That kimchi was expensive.

Cue a quick Google search and stumbling upon Maangchi’s blog, which had step-by-step instructions, pictures, and — wait for it — precise measurements. After more than two decades of scribbling haphazardly in frustration, I was finally learning how to color in the lines. Six years later, there is much more diversity in the food blogosphere, and I am more competent and confident in both the kitchen and H-Mart aisles. I get to flex my cooking skills for my parents and show them this part of our cultural heritage will not end with me.

In a follow-up to Mochi’s Favorite Asian Food Blogs, here are my favorite Korean food blogs.

MAANGCHI (Emily Kim)
Emily Kim, commonly known as Maangchi, is the internet’s OG Korean American ajumma. Since 2007, when she started her blog to quell her video game addiction, she has amassed an enormous global following and won the hearts of the culinary elite. She has been deemed “YouTube’s Korean Julia Child” by The New York Times and “the internet’s Korean mom” by The Verge because, well, Maangchi exudes infectious warmth and cheeriness in her thick accent and fun outfits.

The recipes featured on her blog and YouTube videos are not only approachable; they’re filled with emoticons, puns, and silly captions, the auntie equivalent of dad jokes. She has published two well-reviewed cookbooks: “Maangchi’s Big Book of Korean Cooking” (Houghton Mifflin Harcourt, 2019) and “Maangchi’s Real Korean Cooking” (Houghton Mifflin Harcourt, 2015), which are both available internationally and in bookstores.

What to Make
Maangchi’s drool-worthy recipes tend to be traditional and have tons of rich, salty, and funky umami. She says, “I stick to authentic Korean recipes because that’s what I was raised on and that’s what I know.” Her easy-to-make kimchi recipe is true to its name, and I make a big batch every two months, much to my parents’ amazement. (I simply skip the fish sauce and squid to make it vegan.) After the one-month mark, when it’s nice and fermented, I make her kimchi fried rice (but I add chopped potato to make it heartier, like my mother showed me) and her famous kimchi jjigae, which cleanses both my sinuses and my soul.

For those of you who are still on the fence about kimchi, bibimbap is a classic with sauteed veggies and a runny fried egg, and for you meat-eaters, she has 11 different Korean BBQ recipes so you can make your own at home. Maangchi’s Beginner’s Guide breaks down essential and specialized ingredients and is a great place to start for novices.

KOREAN BAPSANG: A Korean Mom’s Home Cooking (Hyosun Ro)
“In the summer of 2009, I started this blog as a way to teach my children how to cook the food they grew up with. They frequently call me around dinner time asking how to cook certain dishes,” says Hyosun Ro. While Mama Park was teaching me how to listen to the sounds of cooking — not that that’s not valid — Ro was recording her specific techniques and measurements for future generations.

There’s a certain elegance to Korean Bapsang, perhaps because Ro works full-time in D.C. specializing in government contracting, and she brings some of that calm and professional cultivation to her home cooking. Her website is crisp and clean, with brightly-lit photos and standard recipe formats that are super easy to follow.

Her blog posts often go into the rich cultural background and variations of each dish, and her recipes have been featured all over the internet as a result. She was also a guest on Buzzfeed’s The Try Guys Try Korean Cooking, where she jokingly chastised and terrified Eugene Lee Yang with a rice spoon after he stole a pickled radish.

What to Make
Korean Bapsang, although not a vegetarian blog, is personally my go-to for vegan Korean food. I love Ro’s informative post on temple food and zucchini dumplings from when she interviewed with Korea’s Buddhist Television Network. (Fun fact: “Because they have to work with limited ingredients, temple cooks are experts on identifying edible wild plants, creating many different dishes with limited ingredients, and preserving/pickling vegetables when they are in season for later use.”)

Her fried tofu kimbap, with its nutty toasted sesame oil sheen, is also so darn good, I always end up eating way more than the suggested serving size. However, her slow cooker meals are genius for traditional meat dishes, like galbijjim (braised short ribs) and dakdoritang (spicy stewed chicken) that are normally very labor-intensive and time-consuming. As a modern working mom, Ro loves her Crockpot!

MY KOREAN KITCHEN (Sue Pressey)
Have you ever lived or traveled somewhere where the food scene was unfamiliar? Or perhaps too familiar and you couldn’t find the ethnic dish or ingredient you craved? Sue Pressey says she was encouraged to start My Korean Kitchen by her Australian husband to “help foreigners living in Korea to give them some tips on living and cooking there.”

However, after realizing most of her followers actually live outside of Korea, she started to not only feature recipes with step-by-step instructions, but the specific brands she recommends as well. Now that she lives abroad herself, she knows the struggles of sourcing certain Asian ingredients firsthand and often offers different substitutes and tips. Her FAQ is super helpful, such as “How to Make the Perfect Korean Rice” and “What Kinds of Cooking Oils to Use.” Her blog has been featured in Saveur magazine, NPR, Huffington Post, The Kitchn, and more.

What to Make
Pressey plays with a lot of trendier fusion dishes, which are super popular in Asia and just starting to make their way stateside. Most recently, she posted a recipe for dalgona, the whipped coffee you’ve been seeing all over social media, which she says gets its name “from an old fashioned Korean street snack.” For her nuclear fire noodle fries, have milk or your favorite dairy-free alternative handy to wash them down because holy moly, is the pain glorious. She even has a recipe for bulgogi pizza and jjapaguri, which you may be familiar with as “ram-don” and is indeed as delicious as it looked in Bong Joon Ho’s film “Parasite.”

THE PLANT BASED WOK (Hannah Che)
I recently came across Hannah Che’s excruciatingly beautiful food photography on Instagram, and I promptly looked her up because I was thrilled to find a vegan Asian blogger. Che is a Michigan-born, Chinese Korean American chef (and pianist!) who graduated from the Guangzhou Vegetarian Culinary School, where she says the ideology “stems from the centuries-old Buddhist tradition of compassionate eating.” I love that she’s passionate about animal rights, as well as sustainable and low-waste living — although you wouldn’t necessarily know just from looking at her pictures because her presentation truly looks worthy of an editorial spread or Michelin Star restaurant.

In Che’s world, the bottoms of pan-fried dumplings are crisped and bronzed, ribboned fruits and julienned vegetables unfurl meticulously, and sauces drip in slow-motion like movie starlet tears. She is currently in Taipei working on a cookbook (Clarkson Potter and Penguin Random House, 2021), which I definitely plan on adding to my collection if only for the art.

What to Make
Whether you’re trying to eat a more plant-based diet or not, I guarantee her recipes will make you salivate. Her Korean braised kabocha squash and spicy Korean cauliflower wings with their gochujang maple glaze, are healthy, delightful twists on the comfort food I grew up eating. But the future is multiculturalism, and we also need to talk about her addicting Sichuan dry fried green beans, vegan Dan Dan noodles which fulfill my cravings whenever I miss “the real thing,” and char siu bao made with jackfruit in a sticky BBQ-style sauce. Finally, for a sweet finish: Che’s exquisite black sesame chocolate loaf cake with matcha glaze.

Feeling hungry yet? Give some of these recipes a try, and don’t sweat it if it doesn’t turn out perfect. (Just remember to cut down on the gochugaru or gochujang if your spice tolerance isn’t at ajumma level.) As Auntie Maangchi says, “Making Korean food at home is the best way to learn what it’s all about. Also, your family members and friends will be very happy to taste your food!”

5 Places To Go For a Taste of Asian America