Fight Anti-Blackness with our Asian Parents 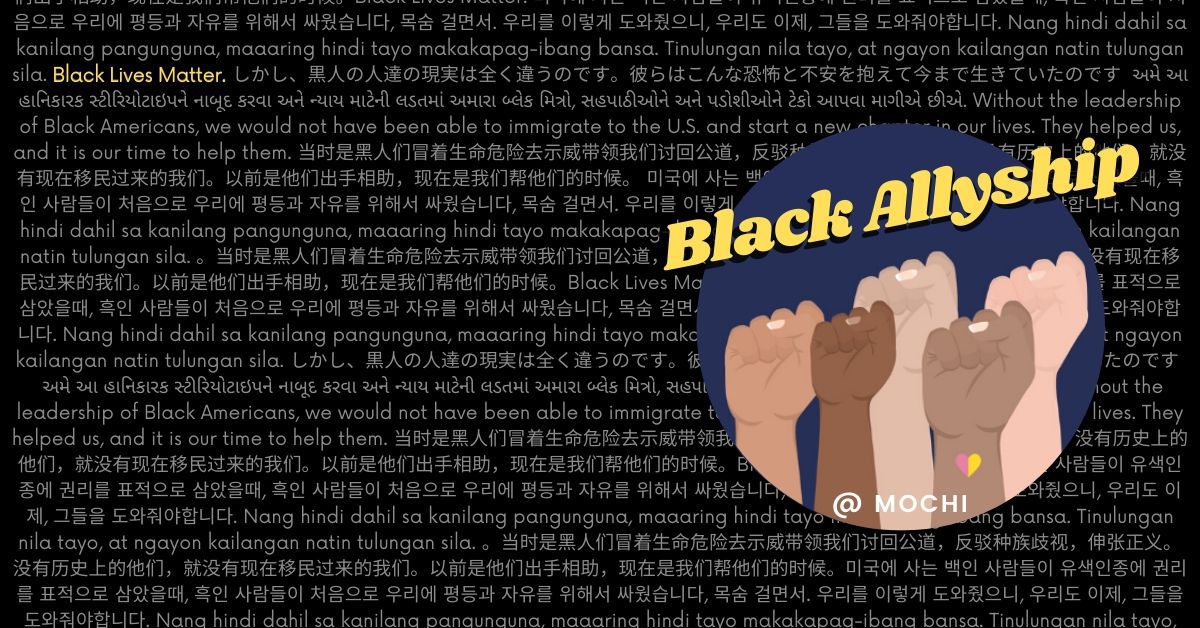 “You can never date or marry a Black person.”

These words, or some version of them, may be familiar to you. They were spoken by my parents when they forbade me from attending a school formal with a Haitian American friend, and these words were repeated to my brother and myself throughout our young adult and adult life.

Growing up in New York — one of the most diverse, yet highly segregated, metro areas in the United States — I heard fellow Asian Americans use racist stereotypes to not only justify that our communities were simply too different to mix, but to also scapegoat, dehumanize and devalue Black people. The model minority myth made us think we were more hardworking, more white-adjacent, and more deserving of success. My father told me I caught lice from hanging out with too many Black girls, and my mother locked car doors, averted her eyes, and pulled me closer when Black men passed by.

Each time I tried to fight against the racism my parents perpetuated, I stumbled inarticulately, lacking the Korean vocabulary to fully communicate with them and express how their words and actions were hurtful and misinformed. Throw in the complexity of traditional filial piety, and my parents dismissed my efforts as disrespectful: “You are always trying to teach us. You are not the parent. Stop trying to teach us.”

It is frustrating and disheartening when we cannot communicate more socially equitable ideas to older generations; not only is there a generational gap and a cultural barrier, but for many second-generation Americans, there is a language barrier. A 2008 study on  Korean American families found a discrepancy in English and Korean language fluency between adolescents and parents, which contributed to “difficulty in establishing meaningful communication.” Frankly, many of us get tired of arguing, and we give up. For the past decade, my parents and I have purposely avoided discussing race so as to not disturb the delicacy of our relationship.

I am now seeing the error and danger in my passivity and silence.

Why We Must Speak Up Against Anti-Blackness
In March 1991, Los Angeles Police Department officers beat Rodney King in one of the first of many viral videotaped acts of police brutality. A week later, Korean American convenience store owner Soon Ja Du shot and killed 15-year-old Latasha Harlins, claiming Harlins was trying to steal a $1.79 bottle of orange juice. Harlins died with the money in her hand. After their trials the following year, neither the officers nor Du served any prison time, and the racial tensions between the Korean American and Black communities erupted into the LA riots. Law enforcement only stepped in to block the roads to protect the wealthier white neighborhoods. I was born the year Koreatown burned, and when I look at Du’s photograph, I can’t help but think she looks like my mother.

I cannot speak for all Asians. However, as a privileged East Asian, I have been complacent in the violent systems of oppression in our country, a country that upholds white supremacy while pitting minorities against each other. I cannot ignore the fact that one of the Minneapolis police officers who stood by and watched while George Floyd was murdered was Asian American, or that he has a history of past complaints, including using excessive force against a Black man. George Floyd’s name has been added to a long list of modern-day lynchings, including Ahmaud Arbery, Breonna Taylor, Tony McDade, and the list goes on.

We cannot stand by and watch this list grow any longer. Over the past couple of weeks, the world has rallied behind the Black Lives Matter movement to fight for justice and social change, and many of us are realizing how much needs to be done beyond performative allyship. To actually stand in solidarity, we need to do better by using our privilege and platforms to take action and donate, protest and fight for legislative changes. And, yes, we need to fight the internalized anti-Black racism within ourselves, our families and our communities.

So how do we start the conversation? Recently, I have seen so many incredible and helpful resources for non-Black Asian Americans floating around social media, including infographics and translations of key phrases into various languages. On Instagram, posts — like the ones below — provide important Korean and Chinese terms to know when addressing anti-Blackness, and easy-to-understand comic strips from @yerongsss have been translated into Chinese, Korean, Japanese, Vietnamese, Arabic, and more.

Letters for Black Lives: In 2016, Mochi interviewed Sara Onitsuka, who helped coordinate this project, which aims to explain the Black Lives Matter movement to older Asian American generations through translated letters. Their 2020 translations, which were released this past week in over 30 languages, address the recent events and come with an extensive follow-up conversations guide.

Talking to Your Asian Immigrant Family About Race – A Guide: Tips for how to navigate the conversation with translations in Chinese (Traditional), Korean, Japanese, Hindi, Indonesian, Vietnamese, Tagalog, Thai, and Arabic.

How the Conversation Went for Me
To be honest, once my fingers hit “send” on the resources above, I dreaded the conversation that would follow. Would they think I was being disrespectful again? I let a few hours pass before I called and asked, “Umma, did you read the things I sent you? What did you think?”

“Of course I read it. Your father and I think the same as you. My heart hurts for them…but they’re tearing down the Korean businesses and stealing our people’s hard-earned work. I wish they would stop. I wish they would just protest peacefully.”

Maybe the hundreds of one-minute conversations we’d had previously were finally getting to stick. But I could see that there was still work to be done. I tried to translate snippets of Giannina Ong’s “Dear Mom and Dad About the Riots” and author Kimberly Jones’ defense of looting: “Why are people that poor? Why are people that food-insecure? That clothing-insecure?”

“At the end of the day, it’s just stuff,” she agreed. “If we call the police for something as small as $20, Black people can go to jail for their whole lives.”

She paused. “Yes. Or killed. And that should not happen. When I first came to this country, I had many bad first impressions of Black people. I didn’t know better. But the longer I live here, I now realize they are just people like me. I now realize the police are not here to help people like us.”

Repairing the Relationship
“Umma, I am so proud of you and appa.”

“You are? Oh, that makes me so happy.” My mom let out a surprised, giddy laugh, and I could hear her repeating my words to my father in the background. I realized that by being ashamed of and by shaming my parents for all those years, I perhaps alienated them from the cause.

We are all still learning, and our communities have a long way to go. When emotions run high and egos get involved and there are deep misunderstandings throughout history, change can feel so very far away. But now that we’re better equipped to handle these conversations, we can convince our parents to not call the police on the Black community and recognize that this is a human rights issue. The time is now for our Asian American community to recognize we are complicit in racist systems, that we need to actively put in the deep emotional labor and fight against the dehumanization of Black people.

And we need to remember that while we are having these conversations, Black lives are in danger.

How have conversations regarding race gone between you and your parents? Please comment below.

2020 Anti-Terror Law: What’s Going On in the Philippines and Why You Should Care