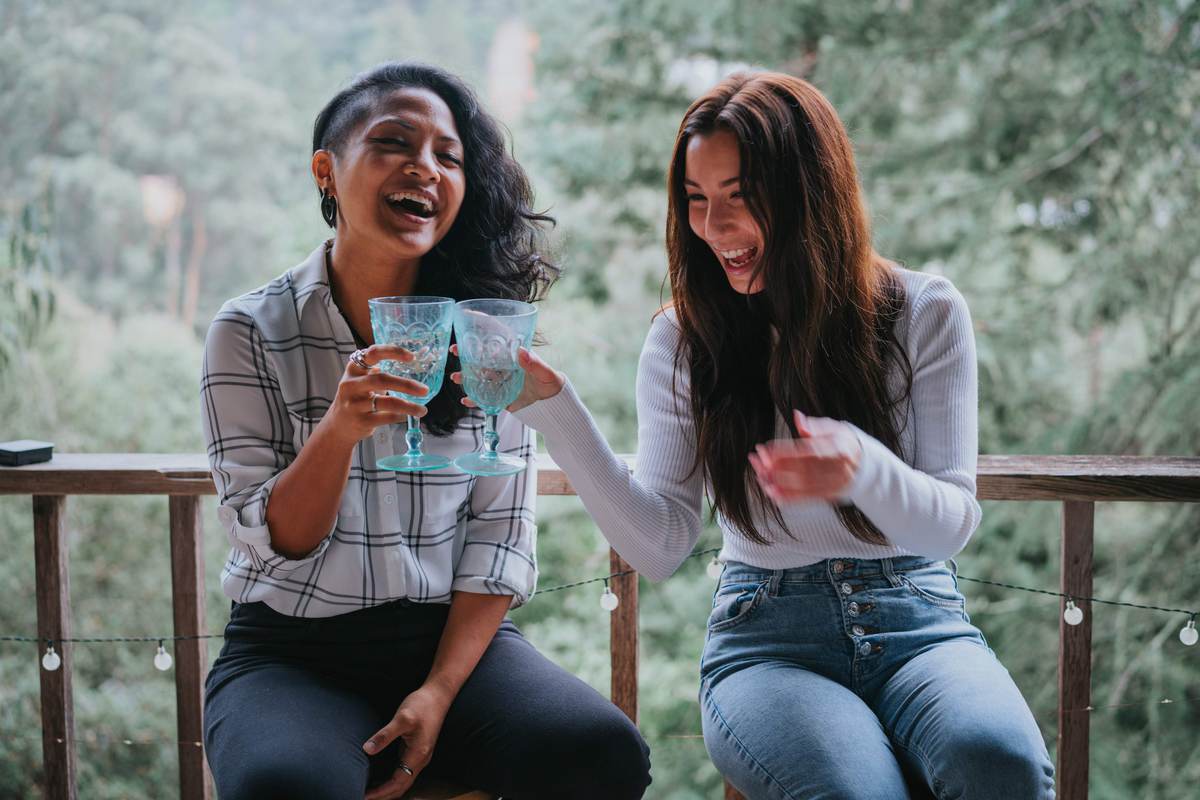 Kapwa. English translation: not found. A Tagalog word, “kapwa” is both a physical space and a metaphysical space. The word encapsulates both a sense of closeness, belonging and recognition. In every episode, co-hosts Jen Amos and Nani Dominguez invoke kapwa along with their guests and invite their listeners to join them. Their podcast, “The Filipino American Woman Project” (“TFAW” for short), creates a space for Pinays to come as they are, to show up as themselves, and to share their experiences as Filipino women in the United States

For me, there was no dissonance between listening to their show and talking to the two over a Zoom call, despite the miles between the three of us: Amos now resides in the city of Virginia Beach, while Dominguez is closer, in the radical and progressive Oakland, and I, in the San Jose area, a California suburb home to tech giants.

Amos, the founder of “TFAW,” is as enthusiastic and chatty as ever, and Dominguez is just as introspective and inquisitive as she is on the show. I have no doubt had we met in person that I would be calling both of them “ate” (older sister) by the end of the hour.

Since 2019, the podcast has hosted over 60 guests, including artists, nurses, mom-preneurs, a paranormal expert, and an environmentalist, just to name a few, and the series in total has been streamed over 22,000 times.

In regards to their guests, Amos shared, “You are good enough. We want to hear your story. [I’m interested in] meeting people where they are at today, allowing people to show up as they are.” She added, “You are asking me who is coming up next, and I am literally having to look it up. I don’t want them to be stressed. I don’t want to be stressed. I just want to get to know people.”

“TFAW” follows through on Amos’ word. When I asked for how the show chooses its guests, Amos and Dominguez told me that interested Filipino women and Filipinx who identify as non-binary simply nominate themselves. As such, “TFAW” has hosted interviews with anyone, from someone recovering from alcoholism to sexual assault survivors.

“All of our narratives are so diverse and different. It’s crazy because some of the people who in my mind are so Filipino, don’t even feel Filipino enough,” Amos says. “Part of my mission and hope with the project is to have people identify how they want and just own it, own how multifaceted they are.”

The two co-hosts’ own identities exemplify the fact that “Filipino,” like the nomenclature of Asian American, is broadly defined. While both are Filipino American, Amos’ parents are both from the Philippines. But plot twist: Her grandfather was actually an American who lived in Oakland, California.

Dominguez is “mestiza,” a term used for those of both Filipino and foreign ancestry, and is half Russian. “My grandma and my dad always instilled Filipino pride in me, but have never given me any context for what that means because they wanted me to just assimilate and live the white privilege that you see when you look at me,” she said.

There are so many different flavors of Pinay. The islands themselves are a “halo-halo” of ethnicity and race, mostly due to the fact that the country has been colonized three times over, but also due to the archipelago’s prime location. (Stacey Anne Baterina Salinas, a feminist historian at the Bulosan Center for Filipino Studies at UC Davis, often joins the co-hosts to provide insight about Filipino identity and decolonization.) Immigration from the Philippines to the United States first began in the 18th century. Still today, Filipinos immigrate to fulfill essential jobs that support the American economy.

I, myself, flip-flop between identifying as Pinay and Chinese American: My parents were born and raised in Manila, but are racially Chinese. As a family, our heritage and cultural traits much more resemble Filipino life than Chinese. In fact, we primarily speak a dialect of Chinese native to the Philippines, hokkien, rather than Mandarin or Cantonese.

Nevertheless, it is a valid question: Who counts as Pinay? For Dominguez, anyone who resonates with that identity is welcome. She recalls the yearning to connect with her Filipino roots and a desire for kapwa: “My uncle [often jokes], ‘This is the white girl who knows more about being Filipino than any of us.’ [Situations] like that made me feel like I wasn’t allowed to identify as pinay. (…) Whether you are a whole, a half, a quarter, if you feel it; if you have that connection with our culture and our community, you can identify [with us].”

Together with Amos and Dominguez, women from all walks of life explore what it means to be a Filipino American on their own terms and in their own words. And it is that struggle of being disconnected — a struggle of having no roots to ground oneself, a struggle felt by so many second- and third-generation Asian Americans —  that is at the center of “The Filipino American Woman Project.”

You can catch up with all the previous episodes of “The Filipino American Woman Project” at https://www.tfawproject.com/ and listen to new podcast episodes released every Friday. Follow TFAW on Facebook for the latest updates.

How Friendships, Poetry and Writing Are Helping Jenny Zhang Amid COVID-19

Interview with Suzanne Park: Writing, Comedy and “The Perfect Escape”

The Unknowable You: An Interview with Playwright Lloyd Suh