SPONSORED POST: Balancing Cultural Flavors and Identity in “Measuring Up” 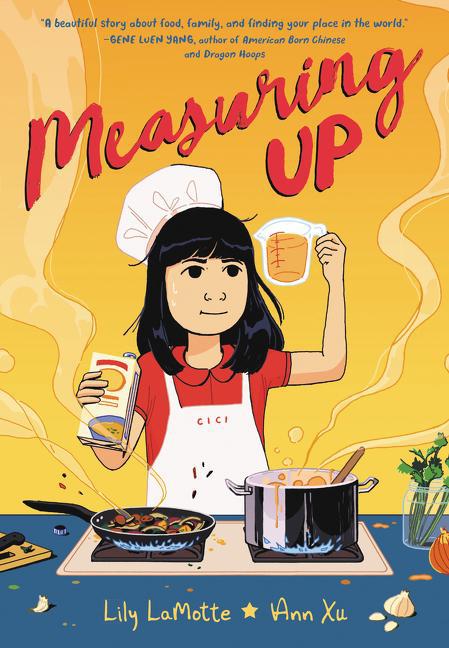 We’ve all been there: some version of a classroom potluck where you have to bring a dish from your cultural background. One hazy memory in particular floats to the surface, where I present a platter of homemade (read: box mix) lemon poppyseed muffins, to my teacher’s bewilderment. Did I misunderstand the assignment? Were my immigrant parents simply too busy to help? What I do remember clearly is the deep secondhand embarrassment I felt as I watched the white kids poke the yellow pickled radish out of my fellow Korean classmate’s kimbap. As a ‘90s kid in the suburbs with virtually no Asian American representation in the media, our food culture was something I hid deep in the back of our fridge, behind cans of Coca-Cola and boxes of Lunchables.

In “Measuring Up,” a middle-grade graphic novel for readers 8 years of age and older, written by Lily LaMotte and illustrated by Ann Xu, 12-year-old Cici deals with similar experiences after immigrating from Taiwan to Seattle. Her new classmates tease her for eating Taiwanese food at lunch, so she starts bringing fluffernutters instead, much to the understandable disgust of her parents. After that, she’s ashamed to invite her white friends over to her house. (Cue my own flashbacks to friends wrinkling their nose at the smell of kimchi in my fridge!) And when Cici joins a cooking contest to raise money for her grandmother’s plane ticket to the U.S., she quickly learns there are many racist ideas surrounding Asian cuisine that she must combat.

Narratives about Asian American children balancing two conflicting cultures are not new. Yangsook Choi’s “The Name Jar” comes to mind, as well as “Save Me a Seat” by Sarah Weeks and Gita Varadarajan, which teaches kids about South Indian cuisine. In “Measuring Up,” Cici must get perfect grades to bargain for more freedom and participate in the cooking contest. Seeing Cici’s father’s response when her grades dropped was like seeing my own father on the page, lecturing me about the other American kids.

“They don’t have to try as hard,” says Cici’s father. “When people see us, no matter how American we are, they always see someone who’s not like them. We always have to prove ourselves first.”

It’s valuable for young readers to find validation in this kind of representation and to empathize with Cici’s struggle with her identity while she is caught between two cultures. LaMotte also helps kids understand where our immigrant parents are coming from, rather than portraying stereotypical “tiger parents” as the antagonists.

Meanwhile, Cici struggles to face and overcome the racist micro-aggressions and xenophobia that both her classmates and judges in the cooking contest perpetuate against Asian food — the food her grandmother lovingly taught her to cook since childhood. It is looked down on as lower class, take-out food, and “not fancy enough.” (Older readers might recall the 2019 controversy surrounding Lucky Lee’s, a white-owned restaurant in NYC that marketed itself as a “clean,” less “oily” and “icky” alternative to Chinese restaurants.)

Just like Cici only brings “American food” to school for lunch, she decides to forgo cooking Taiwanese food for the majority of the contest. At times, it can feel like she’s trying too hard to assimilate and is losing her identity, especially as she imitates Julia Child’s recipes from “Mastering the Art of French Cooking” to advance in the competition. But in the end, she comes to fully understand the Julia Child quote, “When you flip anything, you just have to have the courage of your convictions.” Cici takes what she has learned from both cultures to create her own unique flavors.

These are themes that may inevitably go over the heads of children younger than Cici, so with younger readers, parents, guardians and teachers should emphasize the importance of being proud of their roots. What may help translate these ideas is Xu’s artwork: simple, yet poignant, and reminiscent of Raina Telgemeier’s graphic novels. The panels slow down and stretch to focus on characters’ emotions through body language, in a way that would be difficult to convey with just the written word. As a former children’s graphic noveling instructor, I was thrilled to see a reference to Scott McCloud’s “Understanding Comics.” Xu is clearly putting extra care into the psychology of the panel so that readers fully absorb LaMotte’s story. The writer and illustrator work together to communicate the pleasure and rich variety of flavors, from “fancy” porcini risotto to Taiwanese oil rice with dried shrimp, mushrooms and pork, and dashes of Julia Child’s Americanized French flair in between.

Throughout the story, readers may wonder who is paying for all these ingredients that Cici experiments with at home (certainly not my immigrant parents!) and how all the other young contestants just happened to be genius little chefs, without any preliminary rounds or qualifications. The storyline may feel rushed, particularly at the end of the graphic novel. Without giving away any spoilers, I was left wondering what happens to Cici and her adorable grandmother. But this certainly leaves room for a potential sequel.

Overall, LaMotte captures the complexities of the immigrant narrative and gives us a heartfelt story of family love, finding one’s identity, and the connections that we form through food in a way that both children and adults can savor. “Measuring Up” is a book for kids ages 9 to 13 and Mochi readers alike, and it can be a useful tool for parents and guardians to teach their tweens to honor their cultural heritage and to find the courage to be unique.

While some of the complex facets of racism may require some explaining to younger readers, parents can use the book to introduce these ideas in a palatable way and spark some interesting and important conversations. Teachers can diversify their classroom bookshelves and use the book to teach kids not to “yuck other people’s yum” at lunchtime. As we see more and more Asian cultures being celebrated, rather than mocked or appropriated, I expect to see more kids feeling proud of their cultural identities and redefining what it means to be an American girl.

Writing a New Chapter for Romance