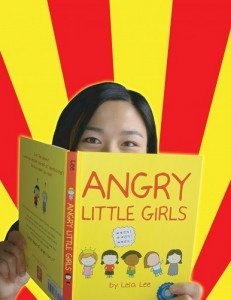 Traditionally, Asians are brought up to respect all forms of authority, be silent unless called upon and above all, always have a calm and courteous demeanor in public. As a child, Lela Lee, the creator of Angry Little Girls was told to brush things off and smile instead of standing up for herself. When she encountered hostility at school, her mother answered: “Just be nice to them, it’s a matter of you assimilating.”

Unsatisfied with this response but unable to change the status quo, Lee kept her mouth shut. It wasn’t until one day at UC Berkeley that she unleashed her frustrations in a class-assigned video short, Angry Little Asian Girl’s First Day at School.

The stereotypes exposed in her video garnered much praise, and people of all races began to take notice. From those reactions she realized, “It didn’t matter what ethnicity you were, we all know what it’s like to be underestimated by our appearance.” 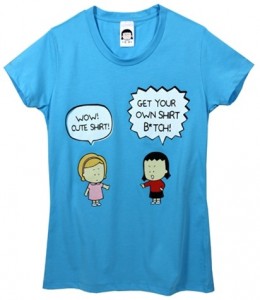 Three years later, she had built an empire, titled Angry Little Girls, with additional characters, and began selling her first batch of graphic tees online, with cheeky phrases like “Get your own t-shirt, B*tch!” People paid attention, and Lee fought to keep the shirts in stock.

When she transformed her video short into print, Lee knew she wanted to continue using anger as her emotional medium. The flood of reactions to her video helped her see that anger was universally difficult to deal with.

The decision to expand into comics was natural. People kept referring to her video as a comic, so she decided it was time to make an official comic strip. Like the use of catharsis in Greek tragedies, her strips express anger for those who are afraid to recognize it in themselves. As the Angry Little Asian Girl would say, “Profanity provides relief.” Not only are the comics funny, but they also serve a deeper purpose by empowering female readers to be more assertive about their emotions, especially public anger, as traditionally discouraged in Asian cultures.

Learning to embrace her anger was a very important lesson for one reader, who was diagnosed with cancer and kept struggling with how angry she felt at the world. Lee’s book helped her recover, teaching her that it was okay to be angry, to accept that some things are out of your control and to not feel guilty about her feelings. For Lee, hearing how her comics helped a reader heal from cancer was “the most touching thing anyone has said” to her about her work. 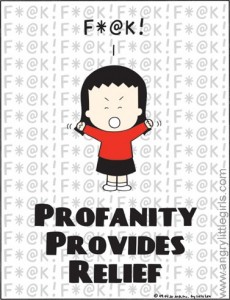 Although Lee started with an Angry Little Asian Girl, anger is no longer the only emotion that her characters express.

“Females express anger in so many different ways,” Lela explained. “So I made the [new] girls all have different personalities.”

Each character represents a natural emotion everyone feels at one point or another. Xyla, for example, embodies the depression that people often find shameful and hide. Wanda is the optimistic, uplifting friend who is fun but can also get extremely annoying. The takeaway: All emotions are as valid as anger, and the key is to recognize and accept them as normal reactions to life.

Angry Little Girls might have begun as a simple class assignment, but for viewers everywhere, it zoned in on the need to address and accept raw and unapologetic emotion. Lee’s work shows us that you don’t always have to swallow your emotions—sometimes it’s good to just let it out. In fact, you should “stay angry and write it all down,” she advised. “It will serve you later.” As someone who built a successful business based on once-suppressed anger, she would know.

Alternative Ways to Have a Proactive Summer

Remembering a Legend: Anna May Wong