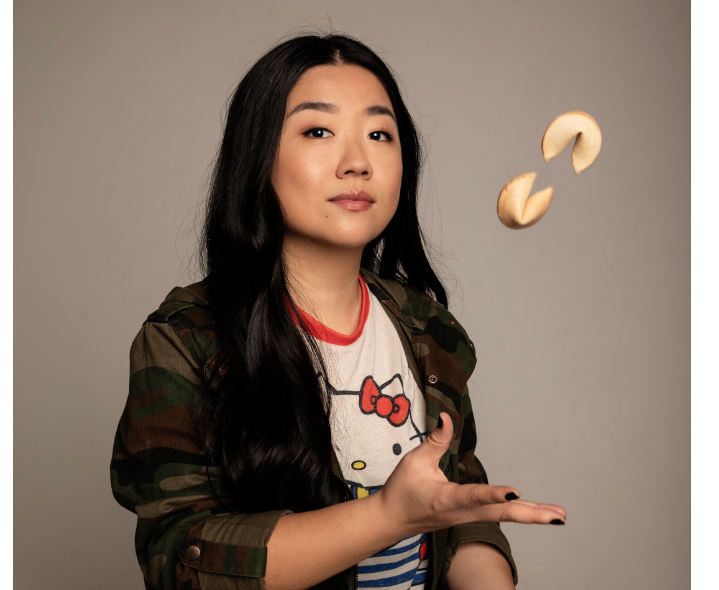 When actress and writer Sherry Cola walks into a room — or into a Zoom — her presence is almost always accompanied by laughter. Her wit and comedy have earned her opportunities to evoke smiles and laughter from her audiences.

Cola described her 1.5 generation Chinese American self succinctly as “someone who loves to make people laugh.” Her long answer? “A standup, an actress, a writer, a host, a noodle lover, you know what I mean? Freelance dancer, if you will,” Cola explained. “A spirit that flies as the wind blows off. Really Drake’s number one fan and reppin’ Shanghai ‘til I die!”

Making people laugh always came naturally to Cola, but her road to success was far from easy. She didn’t just land “Good Trouble” (Freeform), a drama that follows two women’s young adult lives working in Los Angeles, without hustle and perseverance. Like many Asian Americans interested in entertainment and those unfamiliar with the entertainment world, Cola admitted, “I didn’t know what to do with [a passion for comedy] at that age.”

Starting in high school where Cola experienced her passion for creating comedic content, the actress spent seven years trying out different majors at various Cal State Universities. When she finally graduated in 2014 with a ton of radio hosting experience and a major in communications, Cola passed out stickers at Staples Center for a radio station. When she worked with Carson Daly for three years, her character, Lil Tasty — an Asian female rapper permanently wearing a Lakers jersey — went viral and changed her life. Then she achieved her goal at the time: to have her own radio show. However, it was canceled due to the company changing ownership — but all this was for the better. In August 2018, Cola began acting on “Good Trouble” as the queer character, Alice Kwan.

Success for Cola isn’t just about achieving goals — it is about uplifting her and her community.

“I have this beautiful community of Asian brothers and sisters, from Jimmy O. Yang to Kelly Marie Tran, people I can call friends. It’s just so incredible that we’re literally just uplifting each other,” Cola said. “Now we’re getting to a point where we can put competition behind us and truly empower each other because there’s room for everyone. There’s room for [all Asians in Hollywood]. And I think the world finally got a taste of it and it’s so flavorful.”

As an Asian American female comedian, Cola doesn’t fit the stereotypical Asian stereotype of being timid and demure. “I always surprise people with the things that come out of my mouth,” she said, explaining that she always identified first as being funny before being Asian. “But I always felt like I was ‘funny’ first [before Asian], but of course [because of] the way I look, [I know] that’s why they’re surprised.”

When asked about “Good Trouble,” Cola focused on how she was honored to take on a role that meant so much to an often neglected community — LGBTQ+ Asians and queer BIPOC folk as a whole. “Alice is a character I’d never seen growing up,” said Cola. Feeling seen is at the center of what pulled Cola to this character. “Asian girls and queer girls are DMing me, talking about how this is what they never knew they were missing: a character they knew, [one] they needed.”

Portraying Alice also has opened up conversations with herself and others about queerness. ”As someone who identifies as bisexual in real life, I never really talked about it. It was implied and people in my life knew, but [portraying Alice] really inspired me to have open conversations about being Asian and being clear [about] what it means to be a bridge for those communities and feeling a responsibility to do so well.” Cola added, “Playing this character really taught me to live my truth.”

Queer joy comes to mind when watching Cola on the show. Regarding Alice’s coming out scene with her parents, Cola acknowledged it was unique to see queer joy, confessing it was something she had “never seen in my damn life [before].” Cola recalled Alice’s emotional coming out scene with her parents who, throughout the entire season, seemed to be judgmental and close-minded. Yet, “they actually accepted her and knew all along,” Cola said. “That’s a happy ending.”

Cola is aware that both media representation and the realites of queer coming out stories are not always like this. “[They] can get very, very sad. But having that scene on TV like that is the light at the end of the tunnel. I know that it is going to make an Asian mom in Missouri expand her mindset and think, ‘Maybe, maybe…maybe it’s fine that my daughter ends up being queer.” Cola expounded, “[Representation like this] didn’t exist at all in my entire 30 years. That’s why it perpetuated the closed mind to me. I can preach about this all day.”

Whether you know her as Lil Tasty or Alice, everyone should know her as a hilarious, multi-hyphenated bisexual Asian American woman stand up, actress, writer, host, and self-declared noodle lover. Watch Cola as Alice Kwan on the first two seasons of “Good Trouble” on Freeform. Forget Coca — Sherry Cola is the one to support from now on.

Our initial interview occurred prior to the protests in mid-2020, but Cola’s passion about the Black Lives Movement resulted in a follow-up discussion about the movement and the relationship Asians have to BLM allyship. Below is a transcript of our conversation, edited for clarity and brevity.

Spreading the word is a big step. We need to have those uncomfortable conversations with our families who may not be aware of all the messed up things going on in the world. Utilizing social media also helps. We have to use our platforms to retweet and post links in order to educate those who aren’t exposed to the scary truth. Do some reading, watching, listening, and be inspired to amplify Black voices. There have already been some positive changes due to us sticking together and fighting, but we have to keep going.

ELG: I’d also love to hear thoughts on deepening the idea of Asian American activism —  in addition to media representation — rather than plateauing there [at being content with more media representation that doesn’t change the structural powers at play].
SC: Seeing the Black community fight endlessly for their literal lives — it motivates the hell out of me to do the same as an ally to others, and also for my own community. For as long as we’ve known, Asians have been stereotyped to brush things off and avoid rocking the boat. F*ck that! I’ve always tried to break barriers and be outspoken, just so people can take me seriously. It’s time to be unapologetic as a community. This pandemic has brought attention to a lot of racism against Asians, but let’s be real, this isn’t news. We’ve experienced this for years, and even though it feels like the progress we’ve made has been reversed, we can’t give up. We can’t plateau. This is all a reminder that Asians have to continue fighting for our spot in this country and in the entertainment industry. There’s still not enough media representation for us, but I’m confident that our generation can change that. It might not be overnight, but I know there’s a light at the end of this tunnel.

ELG: Anything else you’d like included in regards to the social justice movement?
SC: It’s crucial for us to remember that nobody’s free until everybody’s free. We can’t just sit back and do nothing. The power of the people can’t — and won’t — be underestimated. We can undoubtedly make a difference if we link up and speak up.