Brazilian Jiu Jitsu Helped Me Realize I Am Enough 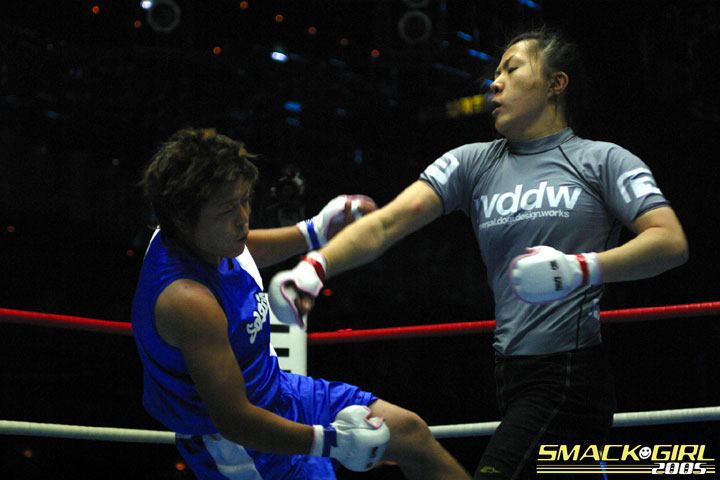 It is no exaggeration to say it’s taken me about one-third of my expected adult life to feel comfortable in my own skin. It’s comical to me that I found my most natural state while fighting through the physical discipline of Brazilian Jiu Jitsu, a methodical yet punishing, niche sport that has risen to prominence in the United States in the last 20 years. The success of the sport parallels the growth I’ve experienced within my personal journey, making my way as a minority and immigrant, facing the unknown, and being the underdog. Somehow through being doubly challenged, I developed a narrative about inclusion in this space and not only found my voice, but have tried to make room for others.

A martial art born of Japanese Judo newaza (ground techniques), Brazilian Jiu Jitsu (BJJ) can be traced back to a Japanese colony that settled in Brazil in the early 1900s. BJJ is based on the premise that a smaller, weaker person can fight on the ground, using specific techniques like joint locks and chokeholds, and defeat a bigger, heavier, stronger opponent. In contrast to martial arts like karate or tae kwon do, BJJ does not emphasize striking or standing techniques.

I’ve been practicing BJJ for almost 20 years as an unlikely candidate. I was born in the land of the rising sun, my mother Japanese and my father Cantonese Chinese. We immigrated to Vancouver, BC, when I was 1.5 years old. Our household was a Japanese-speaking one but it was infused with dim sum, old Chinese noodle houses and dried salted plum candies. I always straddled the lines of more than one culture and I grew up painfully aware that I was not of the majority. As I became an adolescent I expressed myself through art, theater, sports and leadership. Though I was academically accomplished, I was not the piano- and tennis-playing homebody that my parents desired. I gravitated toward the edge of what they culturally valued as refined and ladylike and resisted against what was expected of me.

Picking up BJJ was exciting since it was a little obscure and extremely challenging. I found it by accident after feeling unwelcome and dejected in a Russian Sambo program that, like many individuals and organizations in the grappling sports, exhibited blatant patriarchy and sexism. I was greeted kindly enough and I was allowed to execute simple techniques on my classmates but never allowed to have the same moves enacted on me. I wasn’t allowed to spar and was stunted in my progress due to the restrictions placed on my practice because of my gender. Upon the advice of a classmate I migrated to BJJ which was similar in style (ground-wrestling) though perhaps a little more culturally liberal.

I enjoyed sweating and diving in for a good battle with anyone who would face off against me. My training partners were generally men who outsized me by 15 to 100 pounds. My teammates and I became fast friends because we relished and suffered through our classes together. In our subculture we were creating a new normal and for once, I was a part of it. I trained everyday and prioritized mat time above all to get better. I largely kept my newfound passion to myself because I knew my parents would greatly disapprove. My parents were new immigrant Asians who disliked my outgoing nature and eagerness to get my hands a little bit dirty. I was the rebel’s rebel, playing a sport not commonly played by women, and I was a young Asian first born pursuing personal ambitions that did not align with traditional family values.

As much as I found acceptance and camaraderie with my BJJ team in these early years, women weren’t taken very seriously in the greater scene for a combination of reasons. We are physically smaller with less relative and total muscle mass, so we were perceived as less skilled and strong.  And there weren’t many women in the sport. This lack of representation made it easier for critics to imply that females weren’t as capable as males in BJJ, and if sexual tensions arose in this full-contact sport, females’ reputation were often tainted.

Being a female in BJJ meant having to maintain composure under challenging circumstances—a skill that had to be acquired or strengthened to earn the respect of male peers in the arena. I worked hard to ensure no one had reason to doubt me in BJJ—my diligence, dedication and ambition were all real. I dressed appropriately, was careful with who and how I socialized with my teammates, and tried to train more than my male counterparts. I competed every chance I could in an effort to get better and to show my teammates I could hold my own and display a respectable level of skill. The confrontational nature of tournaments taught me what did and didn’t work in my game and fast-tracked my progress.

In the first few years, I would show up to a competition just hoping there was another female to fight—after all, females rarely had divisions because there were so few to begin with. But we were hungry to show our faces and prove that we were unafraid and eager for the same opportunities as our male counterparts. At heart, I believe that our intent to fight was really a quest about belonging and acceptance. 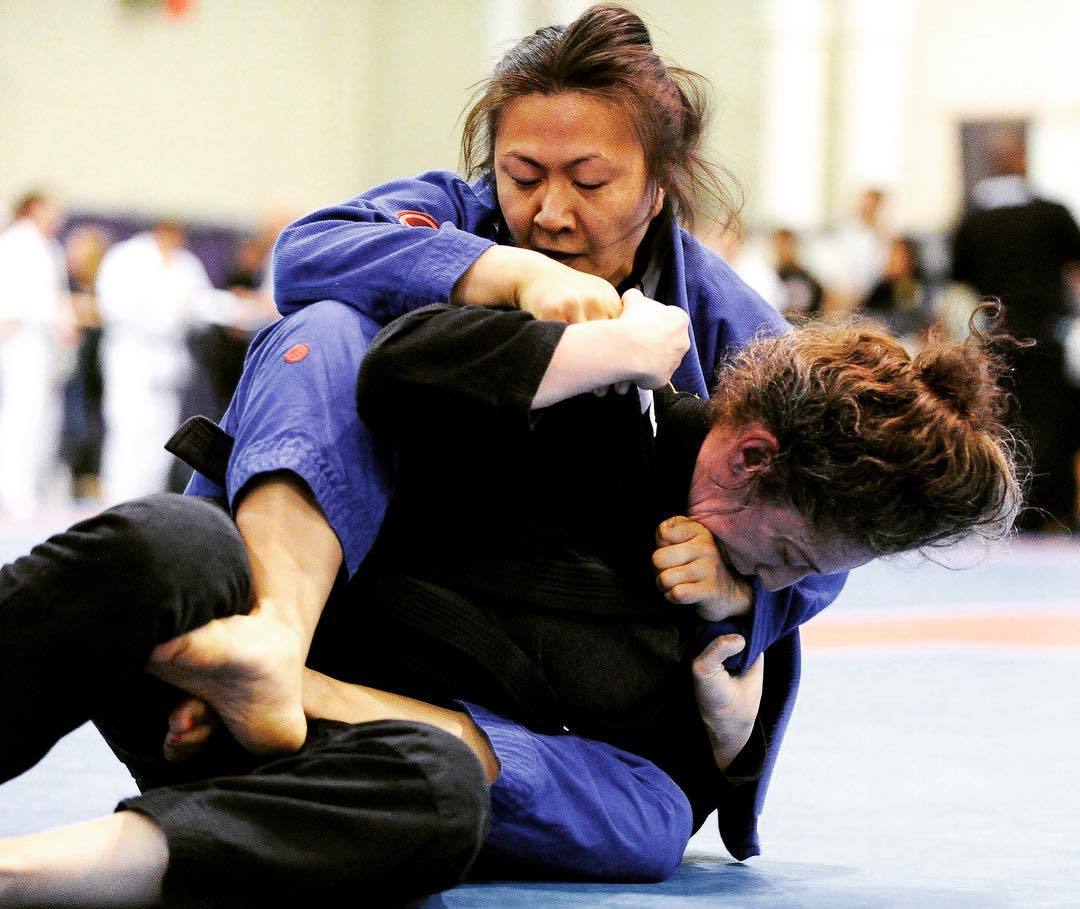 A place where I belonged

Belonging was a familiar theme throughout my life. I identified as a “half-breed” who represented two countries that had historically hated each other due to war atrocities. I was a walking contradiction and I moved through life never knowing anyone like me; my ethnic makeup was usually met with surprised and confused expressions. Looking back, I believe that this quiet little reminder throughout my formative years taught me to never mind what I wasn’t and to just charge ahead and be who I was. As I gained traction in BJJ, it was vitally important that I had this silent resolve because the greater culture could at times be neglectful, inhospitable and hostile toward females. It would take grit and unwavering passion to make any headway.

Through learning to accept my ethnic ‘otherness’, I didn’t allow myself to get deeply attached to other peoples opinions about what I could and couldn’t do in BJJ let alone anything else. If I didn’t really belong anywhere that meant I could just exist in all the gaps; no one wanted to claim me anyway. I knew I loved the sport so I worked hard to learn as much as I could wherever I could. I competed in Canada, Japan and the USA, and I excelled at it. Digging in and doing the work reinforced the resilient nature I was forced to develop over the years and it also taught me how to have internal conviction about the life I was choosing to lead.

While females are occasionally highlighted, BJJ is still a predominantly male-dominated sport and it’s assumed by many that female black belts are best suited for and most comfortable teaching other females and children. The assumption could be attributed to many factors and though we are the minority and it’s not easy to find a platform, it’s important for us to stand for something larger than ourselves so that we become part of the bigger conversation. Many of my life experiences have taught me that standing around after you’ve done the work waiting to be legitimized by the majority will never be in your favor. Until you’re sitting at the same table with the cool kids, you’re not really part of the equation. Most of the time they don’t want you there because they might feel that you’re taking something away from them.  My solution has been to just sit at the same table—don’t wait for an invite; if no one acknowledges you when you first sit down, just sit and wait patiently. Eventually someone will greet you. Or better yet, introduce yourself.

We are all different, we are all enough

These days I’m quite happy to sit down where I like, the path that has led me to this place has taught me to believe that we are all different, we are all enough, and that we all deserve our place. We spend so much time preoccupied with what we think we are or what we are supposed to be instead of being—and just doing. To have started out feeling displaced as a self-conscious, half-breed, immigrant, non-traditional female and to now be liberated by all these things through deliberate physical conflict is truly an empowered place to stand. To find personal resolve in the fire and to feel love and appreciation for the self along the way was much more than I expected to get out of this gentle art. Perhaps in looking for our greatest potential, we should stop allowing what we perceive about ourselves to hold us back from boldly finding our seat at the table.

The Social Education of College